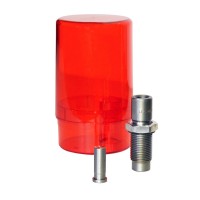 The Lee Precision .454 Lube & Sizing Kit is the fastest and easiest way to lubricate and size cast..

Some orders previously made as guest, all orders were filled and shipped in a timely manner. thank you..

thank you for the ship ment i just got it and im realy happy with the way that it wase packeged thank you and have a great day and god bless..

Speers reputation for making the world's finest component bullets and loaded ammunition goes all the way back to 1943. Thats when Vernon Speer started building bullets because reloaders couldn't get the components they needed from ammo companies during World War II. Although he initially focused on hunting rifle bullets, he also built the first mass-produced jacketed handgun bullets for hunting and law enforcement. In the 1960s, he put some of those bullets into loaded ammunition in the now-famous Lawman line. And today, Speer Gold Dot is the most trusted duty ammunition for law enforcement. Speer offers the same loads to civilians for personal protection thats simply beyond compare. Speer still manufacture their products in the small city of Lewiston, Idaho. The original product lines have been expanded and new ones added. But through the changes, Speer's formula for success has been constant: Determination, self-reliance and independence that show in all of Speer's ammunition and components.