Success! I still have all my fingers, toes and eyes 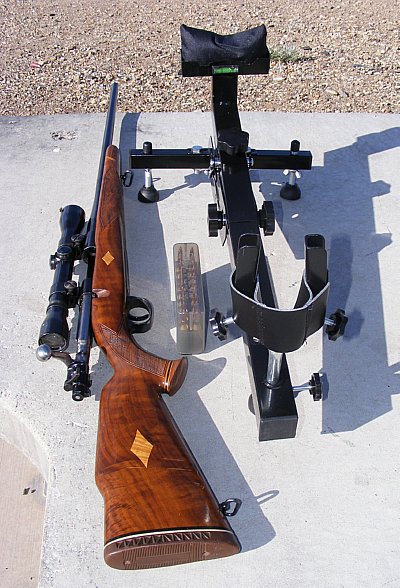 I must admit that I was quite nervous, and a little apprehensive when it came time to fire my very first attempt at hand loaded ammunition. I will even tell you, though I was wearing proper shooting glasses, I had my eyes closed on the first round and missed the target completely. But after successfully firing four rounds without my gun exploding, I realized all my research and careful attention to detail had paid off. I found I had nothing to fear and no reason to doubt my hand loads. I then calmed down and began shooting with confidence and joy, which showed in the results on my paper targets.

Some of you asked why I chose .243 rifle instead of a simpler handgun cartridge for my first attempt at reloading.

There are several reasons including:

Therefore, to start out, I decided to test my hand loads against a box of Winchester .243 caliber 80 grain factory loads using my Mauser .243. I chose to use Winchester 760 powder, ignited with CCI primers, pushing a Sierra 80 grain bullet in an attempt to approximate the factory loads. I used the load data included with my Lee Precision Pacesetter .243 dies (See my article "First Time Reloading- Part I Bench Time" for details).

Shown in the photo above right is my trusty, Mauser .243, 20 rounds of my first ever hand loaded ammo in a plastic slip top ammo box and my simple but serviceable shooting rest.

After loading a box of .243 rounds with my shiny new Lee Precision Breech Lock Challenger Press, I went to the local shooting range to test my handiwork. It was a pleasant Southern Utah afternoon with a sunny sky, temperature in the low eighties and a slight breeze. A perfect day for testing my newly loaded ammo.

Our local shooting range has very convenient, concrete shooting tables so I set up my rifle shooting rest on an unoccupied table as shown in the images above. I decided to use a shooting rest to help eliminate as much of the human element as possible in order to get a more accurate comparison. I used the built-in bubble level and adjustable feet (shown in the photos above)  to get the shooting rest perfectly level. It isn't the best or fanciest shooting rest available, those of you with more cash will doubtless have better equipment, but it is sufficient for my needs.

After sighting in my Mauser .243 at one hundred yards using factory rounds, I set up a new target for my test series. I planned to fire four test rounds of the selected factory ammo, then four rounds of my hand loads and compare the results. 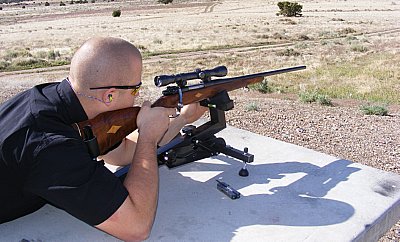 The first two shots of factory loads grouped tightly, the third round dropped about an inch and to the right, the fourth landed another inch straight down. You can see the results on the target labeled "Winchester factory load results below".

After letting the barrel cool down for a while I set up a new target for my first hand loads. As I said before I was a little nervous and I didn't really concentrate on the target. I reflexively closed my eyes as I pulled the trigger and of-course completely missed the target.

I've read many horror stories about light loads leaving a bullet in the barrel which then exploded when the next bullet impacted the earlier stuck bullet. But I knew my first bullet made it all the way out of the barrel because it kicked up a puff when it landed about a foot left of the target. After ejecting the round I carefully inspected the case for any warning signs of over pressure which was my second major fear.

With my second shot I was not quite so nervous as with the firs,t but i still pulled to the left. I again carefully inspected the casing. Since all went well with no stuck bullets and no bulged or split cases, the third and fourth shots where much better as I become more confident and realized there was nothing to fear from my “home-made” ammo.

Now I was getting a bit excited. I had been successful, all my prep work had paid off and the whole experience became much more enjoyable. I again let the gun cool down and set up a new target this time focusing more on the target, my breathing, and squeezing the trigger as I had done with the factory loads. As with the factory rounds the first two grouped tightly the third landed about a half inch low and to the right and the fourth was again straight down an inch as can be seen on the target labeled "My first time reload results" below.

On both tests the first two rounds had a tight grouping and the third and fourth shots went low and slightly to the right. The big difference between my hand loads and Winchester factory loads was the tighter overall grouping from my hand loads. I suspect most of the difference can be attributed to operator excitement. But remember my primary objectives  with this first attempt at reloading were to make ammo that could be fired safely and reliably. As you can see in the targets below, I achieved my objectives and more.

Many factors affect overall accuracy, including:

I know I still have a lot to learn and a lot of experience to gain. More reloading and more time spent shooting at the range will give me experience. More research online and in books, and working with more advanced reloading friends will help with the learning. I've even thought about getting some formal training to improve my shooting skills. 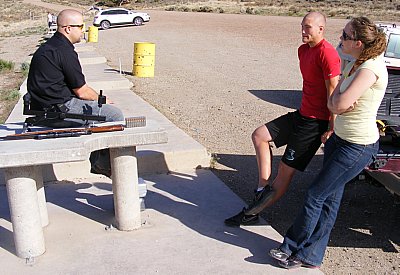 What I learned from this experience:

I'm very proud of the results from my first ever reloads. They not only worked perfectly as intended, they where also an extreme joy to shoot. I couldn't ask for a better outcome.

I was fortunate to have a wife, Kellie and brother-in-law (shown in the photo at right) who encouraged me through this experience. After seeing how well my reloads worked, my wife asked me to make some special, lighter loads to make shooting more enjoyable for her.

I can't wait to try it again and start adjusting and changing things around to see just how much accuracy and consistency I can achieve with my hand loaded ammunition. There is much left to do. I still have yet to reload for my Winchester 88 lever action .243 and my semi-auto AR-10. I have a Lee Precision Perfect Powder Measure that's never had powder in it and just incase I didn't have enough to do, I also received a Lee Precision Classic 4-hole Turret Press for Christmas. The Lee Turret Press seems like a perfect tool for loading ammo to fit my 9mm and .45 ACP hand guns.

And so my journey continues.

The begining of this story can be found in:

Travis Peacock 14 Nov 2012 18 Comments
First Time Reloading Part I — "Bench Time"  By Travis Peacock I've been wanting to get into reloading for a long time and so I've been saving my spent cases in anticipation of r...
Read more
Related Comments